10 CBD Facts You Need To Know

10 CBD Facts You Need To Know 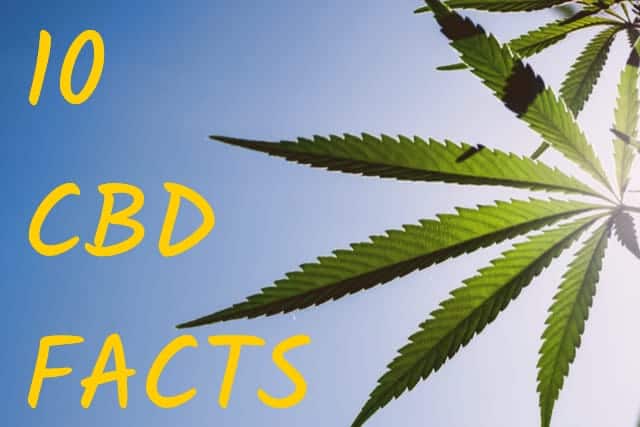 CBD…is it legal? Is it legitimate? Is it safe to consume? Find the answers to these questions and more.

1.) CBD is a Main Component of Cannabis

Cannabidiol (CBD) is a primary component of cannabis. It is one of more than 85 compounds unique to the plant and grouped under the umbrella term cannabinoids. CBD and THC are the most prominent cannabinoids found in cannabis, and as such have undergone the heaviest scientific study.

CBD does not cause the feeling of being ‘high’ that is often associated with cannabis. The high is caused by THC. THC binds tightly to the CB1 and CB2 nerve receptors in the brain and throughout the body. CBD does not bind to these receptors and instead causes its therapeutic actions through more indirect means.

Because CBD will not make you feel intoxicated, it is a great option for parents, workers, and anyone else who does not to compromise their mental clarity.

Many health conditions, both severe and not, are treated with pharmaceutical drugs. Unfortunately, many of these drugs have unpleasant or dangerous side effects. In some instances, CBD may offer non-toxic, virtually side-effect free, natural benefits for individuals who want to avoid or reduce the number of pharmaceuticals they are taking.

3.) CBD Oil from Hemp is Legal

CBD products come either from medical cannabis or industrial hemp plants. While still illegal under federal law, cannabis is legal in several states. And because it has a low THC content (>.3%), industrial hemp does not fall under these same regulations. This means that consumers are free to choose CBD as a natural supplement without worrying about any legal repercussions.

One example of an endocannabinoid is anandamide, or ‘the bliss molecule.’ This molecule activates the CB1 receptor.

Benefits of activating the CB1 receptor include:

An enzyme in the body known as FAAH is responsible for breaking down anandamide. CBD is an inhibitor of FAAH, meaning more anandamide to be available to the CB1 receptors.

Anandamide has been shown to stop the proliferation of breast cancer cells, promote anti-anxiety and antidepressant effects, and increases neurogenesis. Anandamide plays a role in memory and forgetting, creating a potential natural value for individuals with post traumatic stress disorder (PTSD).

CBD is an allosteric modulator at several receptor sites in our bodies.

Allosteric modulators change the shape of specific receptors to alter their ability to interact with neurotransmitters.

CBD is a positive allosteric modulator of the mu and delta opioid receptors. This means it enhances the ability of these receptors to receive endogenous enkephalins which can increase quality of life and naturally reduce pain.

Inversely, CBD is a negative allosteric modulator of the CB1 receptor, reducing its ability to bind with THC; this explains why high-CBD cultivars of cannabis mitigate many of the unwanted side effects associated with THC. [S], [S]

When activated, GPR55 promotes cancer cell proliferation. This antagonizing action may help explain the natural value of supplementing with CBD in individuals with cancer, osteoporosis, and high blood pressure. [S]

CBD activates TRPV1 receptors. TRPV1 is involved in regulating pain, body temperature, and inflammation. Other substances targeting TRPV1 receptors include anandamide, AM404 (a metabolite of acetaminophen), capsaicin, and various cannabinoids such as CBN, CBG, CBC, THCV, and CBDV.

Lastly, CBD activates PPAR-gamma receptors. PPAR-gamma receptors are located on the cell’s nuclei and play a role in lipid uptake, insulin sensitivity, dopamine release and the degradation of beta-amyloid plaque. This is why CBD has been found to have natural value for individuals with diabetes, schizophrenia, and Alzheimer’s disease.  [S]

Clinical Endocannabinoid Deficiency is a condition where an individual has a lower amount of endogenous cannabinoids than is considered necessary to promote health and well-being.

Scientists now believe CECD may play a role in the following conditions:

Many of these conditions are treated with a range of medications that carry some heavy side effects. As the research develops, if CECD is found to be the culprit behind these conditions, CBD would help increase endocannabinoids in the body without many of the risks associated with pharmaceuticals.

Cannabidiol is one of 85+ cannabinoids found in the cannabis plant, and much of the ongoing research has found it to be a promising potential therapy for many illnesses that medical professionals have previously thought to be untreatable, including:

8.) CBD Is But One Part of the Entourage Effect

The entourage effect describes the phenomenon where the 400+ compounds in cannabis work in concert to have a synergistic effect on the body. In other words, it is the sum of its parts that make cannabis so effective.

For example, 100mg of isolated CBD may be substantially less effective at alleviating symptoms than 100mg of a whole-plant, cannabis extract.

Vitamin C may be a good analogy. Many vitamin C supplements are presented in the form of ascorbic acid. Ascorbic acid is just one of the many compounds that comprise the whole vitamin C. In order to be most effective, vitamin C must also exist alongside rutin, Factor K, Factor J, Factor P, Tyrosinase, and Ascorbigen. In fact, in all of his years of research, the discoverer of Vitamin C and Nobel prize laureate Dr. Albert Szent-Georgi was never able to cure scurvy with isolated ascorbic acid. In contrast, eating an orange provides whole vitamin C with all the necessary cofactors for optimum absorption.

While it may be cheaper and more cost-effective to extract CBD from industrial hemp, users may ultimately experience fewer benefits due to the absence of clinically significant levels of terpenes and other compounds which occur in abundance in high-CBD cannabis.

Agricultural hemp is much closer to the kind of cannabis that one would find growing naturally, whereas high-CBD cannabis is hybridized and altered by growers to produce the highest levels of the desired compounds.

Unfortunately, there are no hard facts about the validity of the entourage effect. It is up to each individual to research, consult with medical professionals, and decide for themselves the best path forward.

9.) CBD and THC Have Different Benefits for Pain

Research suggests CBD may be better for inflammation and neuropathic pain, while THC may excel with spasticity and cramp-related pain.

Many people experience difficulty managing the side effects of THC, and because CBD can mitigate these side effects, some experts to suggest a combination of THC and CBD as a more manageable approach to treating pain.

THC is illegal and carries considerable immediate and long-term cognitive side effects. These include impaired thinking and reasoning, a reduced ability to plan and organize, altered decision-making, and reduced control over impulses.

In addition, chronic use of THC correlates with significant abnormalities in the heart and brain. CBD lacks many of these harmful effects.

Given the increasing popularity of medical marijuana, breeders are currently creating strains with higher CBD to THC ratios to minimize these psychoactive side effects.

Overall, the lower health risks of CBD, combined with its efficacy, make it a better candidate for natural supplementation than THC.

Perhaps one of the most exciting applications of CBD oil is its potential impact for adults and children with epilepsy.

Individuals who were experiencing dozens of seizures daily have found that CBD can dramatically decrease the these numbers.

22 Responses to 10 CBD Facts You Need To Know