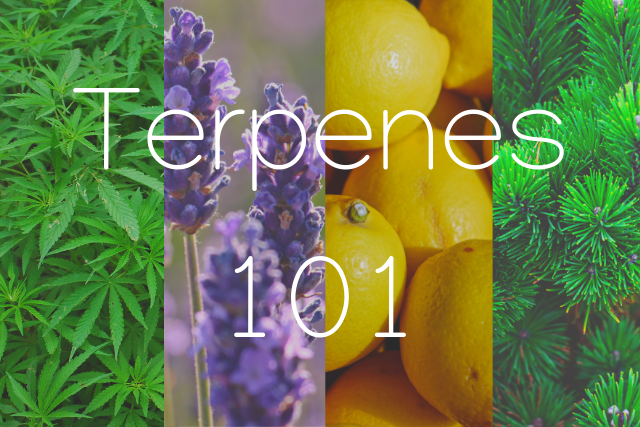 Terpenes are found in almost every plant, and give cannabis strains their unique flavor, aroma, and benefits.

If you’ve spent any time reading about CBD oil and cannabis lately, it is likely you’ve seen terpenes mentioned more than once. Until very recently, terpenes weren’t very well understood and took a back seat in the conversation when compared to tetrahydrocannabinol (THC) and cannabidiol (CBD).

As more research comes out surrounding terpenes, more and more attention is being drawn to them and their potential benefits. It is becoming apparent that terpenes are an important factor in understanding how cannabis and CBD oil products can affect and benefit human health.

Terpenes are organic compounds found in many plants, and are the primary ingredient in natural essential oils. They give plants like cannabis their distinct aromas and flavor profiles, while also providing a variety of unique benefits when consumed.

In the world of cannabis and CBD oil, the terpene profile of any given cannabis plant helps set different strains apart. A cannabis plant's terpene composition has an effect on its purported effects, flavor, and aroma.

The more cannabis is studied, the more complex it becomes! In just this one plant, over 100 terpenes have been discovered so far, each adding nuance to the different cannabis strains.

To help simplify product offerings, and offer more user-specific products, efforts have been made to categorize these different terpenes according to the potential benefits they offer. For example, some strains may contain a terpene that has a reputation for eliciting a more relaxing effect, and in turn may be recommended for patients dealing with anxiety.

When it comes to CBD oil, some of the most common terpenes found in the hemp plants from which cannabidiol is extracted are beta-caryophyllene, limonene, pinene, myrcene, and linalool; here’s a table breaking them down.

Beta-caryophyllene is a terpene found in a variety of different plants including oregano, leafy greens, and some strains of cannabis. According to the research, it has potential gastro-protective qualities and may be useful in treating certain ulcers. It has also shown promise as a potential anti-inflammatory agent, due to its ability to bind directly to the CB2 cannabinoid receptors in the human body.

Limonene is found in many citrus plants such as lemons, limes, and oranges, but also the cannabis plant. It is what gives these plants and fruits their lemony, citrus scent, and so is found in many household cleaning supplies.

Limonene is thought to be both antifungal and antibacterial in nature, and is believed to be the compound responsible for helping cannabis protect itself against insects.

In studies, limonene was found to offer potential stress-relief to rats after having endured non-pathological stress tests.

Pinene is a terpene found in a variety of plants including cannabis, pine trees, rosemary, dill, and basil. The terpene Pinene is further broken down into Alpha and Beta categories, the former giving off an aroma reminiscent of pine needles, while the latter smells like rosemary or parsley.

Pinene has potential applications as a bronchodilator for people dealing with asthma and was found in studies to be an effective antiseptic.

Myrcene is one of the most prominent terpenes found in the cannabis plant. It is a cannabis plant’s myrcene content that determines whether it is categorized as an indica or sativa strain.

Researchers have found myrcene to contain many potential, beneficial properties as an:

The terpene linalool is one of the main components that make up the aroma of lavender. It is what potentially gives lavender and CBD and cannabis products their reputation for offering anti-anxiety, antidepressant and sedative effects.

CBD and terpenes work together in a way that is commonly referred to as the “entourage effect.” The entourage effect describes the phenomenon that allows full-spectrum CBD products made from the whole hemp plant to produce greater benefits than products made from just CBD isolate. The theory is that all the hemp plant’s different terpenes and cannabinoids work in tandem to amplify each other’s effects, creating an overall more potent end result.

One example of CBD and terpenes offering possible increased benefits via the entourage effect is in acne treatment. The terpenes linalool and limonene both have acne-fighting antiseptic and anti-inflammatory properties. When these two terpenes are combined with CBD, which is also a powerful anti-inflammatory, they show promise as a potential acne treatment.

CBD oil is reported to offer anti-anxiety effects. If you combine CBD with a relaxing terpene such as myrcene, caryophyllene, or limonene, you may feel stronger benefits than if you’d taken a CBD oil isolate on its own.

As time goes on, and researchers hone in on the terpene and CBD combinations that offer the most potential benefits, one can only imagine the possibilities. Products tailor-made to suit individual patient or customer needs could be right around the corner.

If you found this article interesting, you might also enjoy: