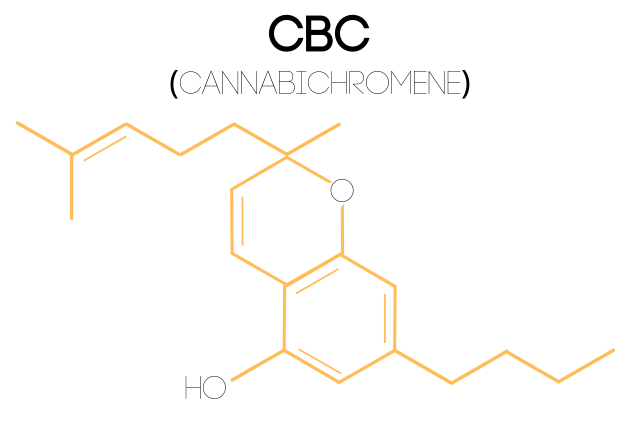 The cannabinoid CBC is showing potential for its anti-inflammatory and antidepressant properties. Could it be the new CBD?

One of the lesser-known cannabinoids, cannabichromene (CBC) may be able to do some pretty incredible things. Recent scientific study has focused on THC and CBD, but as the benefits and function of the other cannabinoids begin to emerge, the research will follow.

To date, the research dedicated to CBC is fairly limited but what we know so far is promising!

What is Cannabichromene (CBC)?

Cannabichromene is a non-psychoactive cannabinoid found in the cannabis plant. Like cannabidiol (CBD) and tetrahydrocannabinol (THC), CBC is created through the process of decarboxylation.

CBC was first discovered over 50 years ago and is considered one of the “major” cannabinoids, but there is still a great deal to learn about it. However, what we do know is pretty incredible.

What Are the Benefits of CBC?

There are many benefits associated with CBC. Because it does not bind to CB1 receptors in the brain, CBC does not cause intoxication. Instead, CBC binds with other receptors like the vanilloid receptor 1 (TRPV1) and transient receptor potential ankyrin 1 (TRPA1), increasing the amount of anandamide (the “bliss molecule) in the body, and providing significant implications for its role in pain relief.

And perhaps one of the biggest benefits of CBC is its role in the entourage effect. CBC acts as a real team player and works with other cannabinoids to increase their effects.

CBC for Pain and Inflammation

In recent animal studies, CBC was found to block the pain and inflammation associated with osteoarthritis. By acting on the proteins associated with pain sensation, CBC showed therapeutic promise in pain treatment.

In another study performed on animals CBC in combination with THC reduced inflammation at greater levels than either compound on its own. Inflammation is at the heart of many human ailments and these results point to the potential for cannabinoids like CBC to provide effective relief.

While the exact mechanisms of this function are unclear and require further study, it suggests an interesting opportunity for more natural treatments of mood disorders.

In a 2013 study, CBC was shown to have a positive effect on neural stem progenitor cells (NSPCs). These cells are central to healthy brain functioning. NSPCs become specialized and work to maintain homeostasis in the brain and defend against oxidative stress.

The NSPCs become healthier in the presence of CBC, which may hold promise for treating and preventing neurodegenerative conditions like Alzheimer's disease.

Among the primary causes of acne are excessive production of sebum, an oily substance produced by the skin for the purpose of moisturizing, as well as sebaceous gland inflammation.

CBC was found to exert effects similar to those produced by CBD oil for acne. CBC displayed anti-inflammatory effects while reducing lipid production in the sebaceous glands. While more research is necessary before any real conclusions can be drawn, these findings suggest that one day, CBC may be an effective and preventative acne treatment.

How to Use CBC

CBC can be found in some strains of cannabis. Unfortunately, it occurs in small amounts and given the patchwork of cannabis laws in the United States, CBC is not accessible to everyone in this format.

However, CBC can also be found as an ingredient in a number of full-spectrum and broad-spectrum CBD oils. If you are interested in reaping the potential benefits of CBC or want to experience the whole plant entourage effect, look for a CBD oil products that contains CBC and other cannabinoids as well as naturally occurring terpenes, flavonoids, and fatty acids.

To be 100% sure your product contains CBC, you’ll need to check the Certificate of Analysis for the item you’re thinking about buying. A Certificate of Analysis is a lab report that breaks down the different components of each batch of CBD oil product, including the cannabinoids (including CBC), terpenes, chemicals, pesticides, and heavy metals, to name a few.

If you found this article useful, you may also enjoy: